The nuns and nurses of Nonnatus House are returning to our screens for the Call The Midwife Christmas special and they’re facing the challenge of the coldest winter for 300 years – the Big Freeze of 1962-3.

But despite Poplar being under a thick blanket of snow, the women still strive to provide the best possible care for their patients. Here’s everything you need to know about the festive special…

1. The Big Freeze has big effects on the Poplar community

The Big Freeze was one of the coldest winters on record in the UK and the country was brought to a standstill by a thick blanket of snow. Jenny Agutter who plays Sister Julienne in the series, told us: “The effects range from a case of someone dying of cold to the problems of no milk delivery, which of course spoils teatime!”

2. There are more births – but they don’t always go to plan

Jenny told us, “The power cuts that come at the beginning of 1963 also mean that everything has to be arranged according to the times that electricity is supplied – and births don’t always go to plan.” 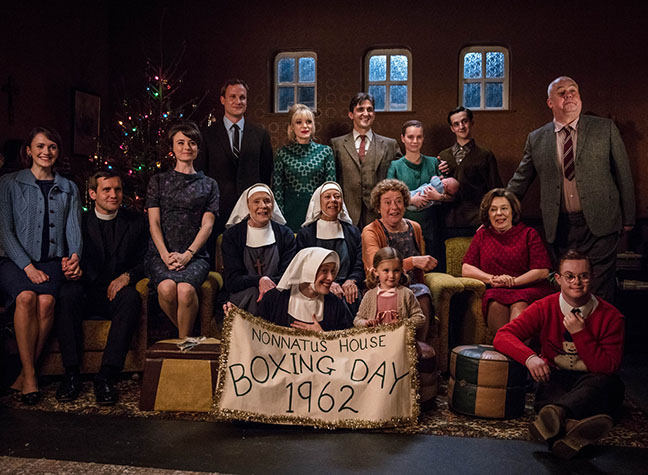 3. Anita Dobson is a guest star

Anita is starring as Mabel Tillerson whose husband dies of hyperthermia on the streets. Anita told us: “When I went to the Call the Midwife read-through, I just remember being staggered at the quality of the script. I’d never watched the series before, but everyone had told me how wonderful it was – and I could see why.”

4. There’s a new midwife in town

Black Mirror actress, Leonie Elliott, has been cast as Nurse Lucille Anderson, who is the first West Indian midwife to feature as a regular character in the show. Call the Midwife creator Heidi Thomas said, “She’s going to bring stories with her, and a different cultural point of view, and that’s very exciting.”

5. There’s a Christmas panto in store

Laura Main who plays Shelagh Turner revealed to us, “Cliff Parisi who plays Fred dressed up as a dame, which was a very funny sight. And Alice was dressed as a magic bean, which was very cute.”

The Call the Midwife Christmas Special airs on BBC One on Christmas Day.