Written by BAFTA-winning Kay Mellor (In the Club, Fat Friends), BBC One’s new six-part drama  Love, Lies and Records follows registrar Kate Dickenson (Ashley Jensen) as she juggles her personal life with the daily dramas of births, marriages and deaths, and the impact they have on both her and her co-workers, played by Rebecca Front, Kenny Doughty and Mark Stanley.

With a daughter hiding suspicious messages on her mobile,  a son who hates her because she’s bought him the wrong trainers, and a stepson who’s turned up unannounced to stay, she has her hands very full.

Our Entertainment Director Nathalie Whittle caught up with the cast to talk about laughing fits, emotional scenes – and the pressures of being a registrar… Ashley Jensen (above centre),  48, lives in Bath with her husband, actor Terence Beesley, and their son, Jonathan, eight. She plays the lead registrar, Kate Dickenson.

My character, Kate, is doing what a lot of women are doing in this world now. She’s trying to juggle family life and be a good mum and a good partner as well as working. She has a son from a previous relationship, a daughter with her partner Rob [Adrian Bower], and a stepson.

Life has got in the way of Kate and Rob’s relationship. Deep down, they love each other, but they’re not really finding a great deal of time for one another at the moment, with children pulling them in different directions.

Kate’s co-worker, Judy [Rebecca Front], who’s a senior registrar, is her nemesis. They work in very different ways. Kate  is intuitive and Judy likes to have a bit  of order, so finds Kate chaotic… Judy has something over on Kate and it becomes a question of morality – as you’ll see!

I think a lot of people will relate to these characters because they have vulnerability. They get it wrong sometimes. There’s no person you’ll point at and say, “You’re the baddie.” It’s very much like life.

Before filming began, we met these wonderful registrars at Leeds Town Hall who showed us what they do every day. They’re dealing with people who are sometimes at their most vulnerable – bereaved people and other times it’s people registering marriages and births when they’re at their most joyful. We’ve got a storyline that deals with a potential sham marriage. Being able to detect scenarios like that can’t be easy, can it?

My favourite scene is in the first episode where we’re all in a hospice. I don’t want to give too much away, but it was difficult not to cry because it was jsut so moving. There’s so much emotion in this series that I think it will be difficult not to stay hooked. 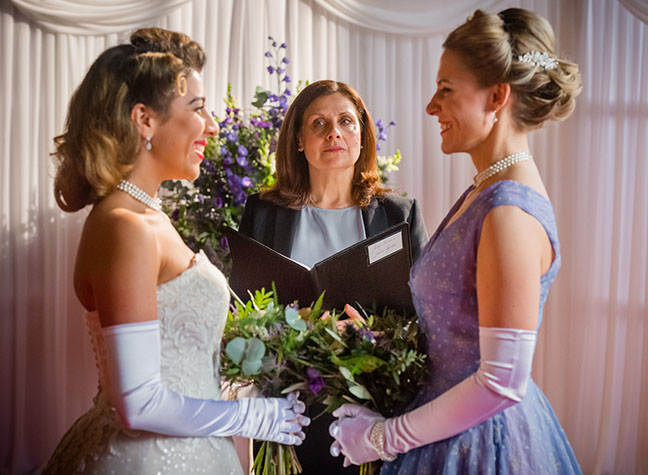 Rebecca Front, 53, is married to screenwriter Phil Clymer. They live in London with their children, Oliver, 19, and Tilly, 16. She plays senior registrar Judy.

At first my character, Judy, looks like the obvious choice for a senior position. She’s incredibly organised and good at the job. But we soon start to see that she’s not a great people person – and Kate is. I think everyone can see that Kate is a much better bet – except for Judy. So when Kate is promoted over her, she doesn’t take it well.

Judy isn’t a “baddie”, but she does  a terrible thing in the heat of the moment. Then she’s stuck with it and has to try to make the best of it. I’d  like to think I wouldn’t behave in the same way as she does, but we all do irrational things sometimes, don’t we?

One of the biggest challenges was trying not to get the giggles too much, especially with Ashley around! We had one spectacular meltdown;  we were rushing to get things finished when I came out with a question that made no sense at all and Ashley said, “Well, I don’t know how to answer that!” That was all it took. The cameramen downed tools and just watched us weeping and gasping for air.

Mine and Ashley’s characters do  have some serious showdowns –  and there’s one scene where Mark’s [Stanley] character reveals himself to be transgender, which was incredibly powerful. Judy is very unsympathetic, but it was hard not to get choked up.

We had to film a citizenship ceremony – the final step to becoming a British citizen. Kay told us she’d been to one herself and found it really moving – and so was this one, despite the fact that ours was fake and we weren’t real registrars! 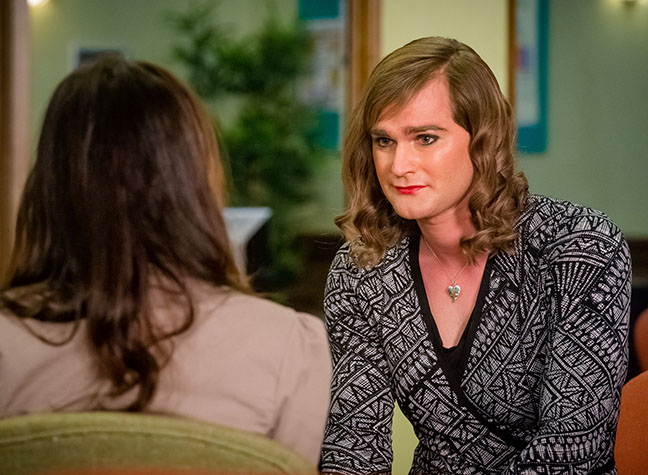 I’m not sure I’ve ever had as much fun as I had working with this cast. Rebecca was the one always asking for gossip – she’s treated a bit like the Head Girl in Sixth Form because of the persona she gives off…but we now know better. And Kenny [Doughty] and Ashley were usually talking about food, if they weren’t eating it. Then there was me organising nights out for us all in Leeds.

My character, James, has suppressed his transgender orientation since he was a boy. He’s married with two sons and we see him make the transition to become Jamie, which isn’t easy at all. The last thing I wanted was to end up portraying some kind of drag act, so I went to a transgender support group to prepare and told Jamie’s story as if it was my own. It opened my eyes to the fact that there is no black and white with this subject – everyone’s stories were different, but everything was acceptable. We need more of that acceptance in the world.

When the hair and make-up team first saw me, I think they thought, “What on earth are we going to do with him?” I don’t exactly look particularly feminine. I had to start shaving my face four times a day, get my eyebrows plucked and have hair extensions put in. That was a challenge! I had to wear them for three months straight and unless you blow-dry them out, they look like little rat’s tails with bits of glue everywhere. The day they took them felt like having the bars of my prison cell opened.

The interesting thing about dressed as a woman was noticing how different the conversation was when I was in a room with other women. They’d forget I was there (underneath all that hair and make-up) and they’d sit there discussing all these really sordid things! Then they’d see I had my listening face on and say, “Oh god we can’t say that, Mark’s in the room!”

I invited my dad on set one of the days and he’s actually ended up starring as an extra. We were filming a scene in a pub and he’s in the background having a drink – in fact, you’ll probably notice him because he was the world’s worst extra. He’s so clumsy and kept knocking everything over. He’ll never be invited back. Kenny Doughty, 42, is married to actress Caroline Carver and lives in London. He plays registrar Rick.

I think a lot of people will relate to my character, Rick. He’s in a long-term relationship and they’ve been trying for IVF for a long time, but over the course of the series, he starts to question what’s important to him and what he wants out of life. He has a very close working relationship with Kate Dickenson [Ashley Jensen], which eventually turns slightly intimate. He wants to take it further, but he’s in a dilemma.

One of the funniest – and scariest – moments happened on our first day of filming. I was in a car with Ashley [Jensen] and she was the driver, so she said to me, “Don’t you worry yourself, I do know how to drive.” Then they called “action” – and she slammed the thing into reverse by mistake. We were going backwards for good while before she put the brakes on!

Shooting an emotional scene at 2am was the toughest part. It was a really meaty scene and we were in the centre of Leeds with all these students spilling out of bars, shouting and being silly. Let’s just say holding a certain level of emotion in the freezing cold while waiting for that to die down isn’t easy.

I now know that I certainly couldn’t do the job of a registrar. When we met a team of real-life registrars who deal with the deaths of children and spouses day in day out, I had to ask if it affected them – and 99% of them said yes. I admire their courage a lot.

Love, Lies and Records airs on BBC One, Thursdays at 9pm.